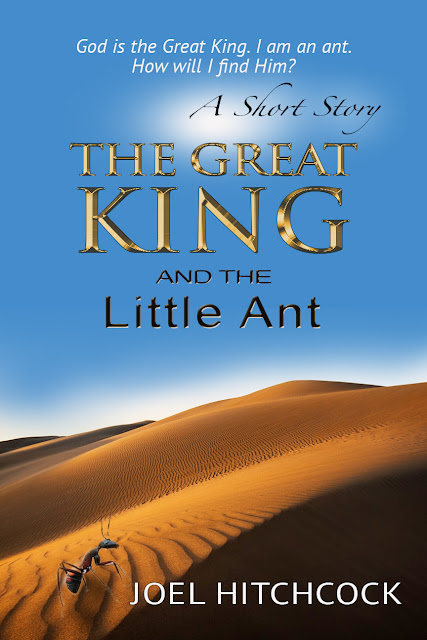 The Great King and The Little Ant

There once was a little ant who lived in a tiny village in a very poor country in a forgotten part of the world. But this village looked very big to our little ant and he wondered how big the whole world was. He was awestruck by the size of the large white cows and bulls and also how strong the buffalo were.
Though these beasts were very large, he also was in awe at the size of chickens and hogs. He once almost got pecked up by a chicken, but luckily he blended well with the dark sand and the chicken pecked up a piece of discarded rice that was almost twice the size of our little ant.
The ant became fairly wise. He noticed that there was an old man in the village that everyone respected. He finally learnt that this old man was the chief of the village and that he had much wisdom and authority. In the mind of the little ant, the chief was the most powerful man in the whole world.
So our little ant decided one day to move into the chief’s house. There was always enough rice thrown out that the ant could feast on and also to store up enough for the winter. Our little ant was so smart that he even began to understand the language of the people.
He also understood their body language, and he loved to translate the humans’ actions and words to his fellow ants, who by now had truly come to respect him also.
There was also a special thing there in the house of the chief. It took our ant a while to be able to pronounce it, but finally he could say this big word. It was a television. There were wire things on top of it, and another wire thing connected it to a box thing that the humans called a battery.
Our little ant noticed that the chief always stared at this thing that they called a television, and that after the chief looked at it, the chief was much wiser than before. So our little ant said to himself that if he too would stare at this thing they call a television, that he also would become wise – perhaps the wisest ant in the whole world. Our little ant knew how big the world was, because he had traveled extensively. One of his trips took him three months, and covered the area of the chief’s house, the neighbors’ kitchen and the pig pen. From there he could even see the water well, but he never went that far. At least he could say that he saw the end of the world, because nothing existed on the other side of the well, or so he thought.
One day our little ant crawled up to the shoulder of the chief, while the chief was again staring at the television to enrich his wisdom. Our little ant could understand everything. But one day he saw a very important man on the television. The television speaker said that this man was the most powerful man in the whole world, for he was the Great King of a far country, which was also the most powerful country in the world.
It was hard for our little ant to believe that anybody could be more powerful than the chief, but this is what the television said, so it must be true, thought the little ant. He was almost overwhelmed by this thought, and for some strange and unknown reason our little ant developed the greatest and most intense desire of his life:
He wanted to meet this Great King.
To read more, purchase this book on Amazon (available in both paperback and e-book.) Click on one of the links below:
Click here for the book:
The Great King and the Little Ant (A Short Story) by Joel Hitchcock (Paperback)
The Great King and the Little Ant (A Short Story) by Joel Hitchcock (Kindle)